skip to main | skip to sidebar

Percy Jackson & The Olympians: The Sea of Monsters (Book 2) 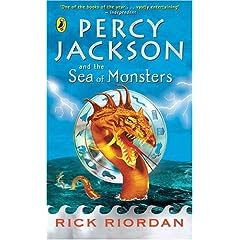 Percy Jackson had almost ended his whole year of school without any monster attacks until the last day of school. He got attacked by Laestrygonians.. They are big and very strong giants who have a lot of tattoos. When Percy was playing dodge ball, when all the balls ran out, the Laestrygonians made bronze dodge balls that were on fire to try to kill Percy. But Percy's only friend, Tyson, caught two of the balls that were thrown at Percy. At Camp Half-Blood, where Percy sneaks off to, without telling his mom, he figures out that his friend Tyson is a cyclops. Tyson caught the balls because he was a cyclops, which Percy didn't know until then. Poseidan claims Tyson and Tyson tries to save Percy but when Tyson saves Percy, Tyson almost gets killed. In the end, they have to get the Golden Fleece from Polyphemus because he stole it. Percy tries to steal it from Polyphemus to put on Thalia's tree and he succeeds but the magic works a little too well - so it made Thalia become human again. (She WAS the tree.)

My favorite character was Tyson because he thought Chiron was a pony. I also liked Tyson because when Poseidon claimed him as his son, he tried to swat away the green trident above his head. I liked this part because everybody was surprised that a cyclops was Percy's cabinmate. It is surprising because cyclops are monsters and it's surprising that he's Percy's brother.

This was a great book. Adios, amigos!
Posted by David S at 1:39 PM No comments:

Percy is a half blood. Half blood means half god half human. He is the son of Poseidon the sea god. Poseidon never met his son. Percy was expeled from six schools. Yancy acadamy (where he went to school now)had a math teacher named Mrs.Dodds was a furie a monster that had a fire whip saber tooth teeth & bat like wings. There is a boy at the camp that Percy goes to named Luke and he stole Zeus's master bolt. Percy's job is to return the master bolt. Percy gets the bolt and returns the the bolt.


My favorite charactor  was Grover the satyr because he was half man half goat. I like Grover because he looked like he was eleven but he was at least 26! Grover is a great satyr.

I am very excited to see the movie. I hope they put the fight of Ares vs. Percy into the movie.
Posted by David S at 6:47 PM 5 comments:

The Invention Of Hugo Cabret

Hugo is a boy who loves machinery. He and his father both had a secret up in the attic of the museum that Hugo's father worked at. It was called an automaton, which is a machine that magicians used to make people think that by magic words they made the automaton write messages or draw pictures. By using a special key that they put into the back and turned it and after a few seconds it started to either draw a picture or write a note. The automaton in this book was one that drew the picture of a trip to the moon which had a moon man inside of it which gave the moon a face that one day a rocket ship went right into its eye. After his dad died in a fire, Hugo tried to steal toy parts that might fit into the spaces where the automaton was missing pieces. A girl named Isabelle had the right key for this automaton which was heart shaped and it belonged to her godmother. She lived with her godmother and godfather because her parents died in a car crash. She stole the key from her godmother's drawer. When Hugo got caught stealing toys from the toy booth the owner took his father's secret notebook so Hugo followed him to his home and it turned out that he was Isabelle's godfather. His name was Papa Georges. When Hugo fixed the automaton the last thing he needed was the key on Isabelle's neck. So one day he stole the key from Isabelle, put it into the automaton, and he turned it and watched it do what it was going to do. He thought his father had a message in it for him but instead it drew a picture of a trip to the moon. But when the automaton finished the drawing, he wasn't done. He had to write the signature. The signature was Georges Meiles, which is Papa Georges, who used to be a magician. But he was forced to stop being a magician and give a shoe company all his tapes and that company burned all of them and made them into shoe heels. In this book, Papa Georges hates hearing shoes clicking because he remembers that the shoe heels are made out of his old movies. In the end, Hugo becomes part of that family and that is good. This is the best book I have ever read. My favorite person was Hugo because was a good builder. I also like Hugo because he grew up to be a magician. Hugo was very creative. I also like the illustrations because they have a lot of detail.
Posted by David S at 7:50 PM 1 comment:

Alex and his friend Sabina were on a beach in Cornwall and Alex saw a mysterious boat that held the person that killed his uncle Ian Rider. The person's name was Yassen Gregororvich. Yassen was working for Damien Cray. Damien Cray invented a game system called The Game Slayer. He had a big party in a really big dome. Lots of reporters and people who were fans of Sony and Playstation and Xbox were disappointed that Damien Cray made a game system that would be the best game system in the world. There was one game only at first because he didn't invent any other games yet. The first game was called Feathered Serpent. The game was a killing game and he asked if any teenagers were there at the party and then Alex raised his hand to try out the Game Slayer. He almost beat the whole chapter but Damien Cray was mean enough to think that Alex would make it look too easy so when Alex's game avatar was in the Maze of Mirrors, he had to fight different guards. Everybody knows that Damien Cray hated war but he knows what kind of games teenagers like. So a woman said why did you invent a game with killing when you don't like killing? So Damien Cray had a person run over the woman. I will now tell you the middle of the book. Sabina's house that her mom and dad rented for the summer got blown up by Yassen. He was a contract killer who only worked for people who paid him a lot of money when he finished the job. Yassen got killed in the end by Damien Cray. Damien got defeated by being on a cart and going down the emergency escape slide off the plane. Sabina pushed him on the cart and out the door onto the emergency escape slide onto solid ground of the runway. Alex nearly got killed by Damien Cray but he had a bullet-proof ski jacket. The book is called Eagle Strike because the operation that Damien Cray was doing was called Eagle Strike.

My favorite part of the book was when Damien Cray told Alex how he would make seven different kinds of atomic bombs shoot from secret places and mountains. I liked this part because the button that he pushed could only be pushed by the President of the United States. So Damien Cray put latex on his hand and insisted on shaking the President's hand which gave him the fingerprint of the President. The button that he pushed had a sensor so whoever pushed it it wouldn't work unless the President pushed it. I thought that part was amazing because it had cool technology.

Mom's note: This book sounds incredibly complicated to me! I believe that Dad has already read this one and maybe he would have been better to help out since I'm still not sure what happened in the book!
Posted by David S at 6:37 PM 2 comments:

The story is about three brave pigs who fight Gung-Ho. The three pigs' names are Stinki the Samurai, Rinki the Kung-Fu Master and Dinki the Young Priestess. Gung-Ho is the evil general wolf with a magic sword. When he says strange incantations the sword does what Gung-Ho tells the sword to do. The pigs' master gave them one pair of slippers. Whoever puts them on would turn invisible. Dinki puts them on and turns invisible when she is fighting Gung-Ho. She takes out his sword from its scabbard and tries to control the sword to defeat Gung-Ho. The plan worked.

I like the part when Dinki took the sword and made the sword be under her control to defeat Gung-Ho. She tried with all her might to get it to be under her control and then she finally got it to work and she said words to save her friends Stinki and Rinki. I like this part because after she defeated Gung-Ho she told the sword to go to the bottom of Crane's Lake. I like how the sword got trapped in the sand at the very bottom of Crane's Lake and then was long forgotten. This is good because it was a deadly sword.
Posted by David S at 7:51 PM 2 comments:

The Black Belt Club: beware of the haunted eye

Beware of the haunted eye is about the black belt club going to a land of focus.Where they meet a preistess who needs help because a eye of doom witch is clogging up there focus. It has hipmotism  powers. Witch it uses on the animals of the forest.

My favorite character was Jamie because she used her swiftness agility and intelligence to beat the haunted eye. She is very smart. She knows how to settle things down and she doesn't like to be the leader a lot. I like her a lot because her animal power is the eagle. I like her eagle because it can help her to take really big jumps like she can fly.

The Black Belt Club: night on the mountain of fear

Night on the Mountain of Fear is about the Black Belt Club going to a mountain of fear & hatred to where a Heyoka lives. a Heyoka is half man half coyote. The Heyoka is the hate-master. He was trapped inside of the mountain of fear for a very long time. Then he got out and all the animals were full with anger and hatred which made him stronger. The black belt club used the four winds kata to get to the mountain of fear where Grandmother Dancingfeather gave Max a quartz crystal, Antonio magical maracas, Jamie a striped seashell and Maia got an indian fan. They had to put them all into the rockman for the four elements, fire, earth, water and wind. They all had to place their things into each direction of where their elements came from. They defeated the Heyoka by saying happy things and things that make them laugh and what they love.

My favorite part was when Max shouted "my favorite thing is having friends." That made the Heyoka turn back into a coyote. I liked this part because then I learned that the Heyoka was really a coyote. I like Max because he likes to have friends just like me.
Posted by David S at 7:48 PM 1 comment: